Camila Cabello Wiki
Register
Don't have an account?
Sign In
Advertisement
in: Camila, Songs, Songs from Camila,
and 3 more

View source
watch 01:36
We're Getting Mutants in the MCU - The Loop
Do you like this video?
Play Sound

"Consequences" is the sixth track from Camila Cabello's debut solo studio album, Camila. The orchestral version was released as an official single for digital download and streaming services on October 9, 2018, and impacting US contemporary hit radio on October 16, 2018.[1]

On December 21, 2017, Camila revealed the official tracklist of her debut studio album, Camila, which the song is featured as the sixth track.[3]

On January 5, 2018, she introduced the song in a tweet by presenting a snippet accompanied by a gif where some lyrics were shown.[4]

The newspaper The Sun wrote about the song: "Her most deeply personal and tear-jerking ballad with her powerful vocals against a delicate piano. She sings about the impact of a partner on her life, even revealing: 'Lost a little weight because I wasn’t eating'."[7]

The song was performed several times on her Never Be The Same Tour, promoting her debut album.

Cabello performed the orchestral version of the song on October 9, 2018, during the 2018 American Music Awards.[8]

The orchestral version of the song was released as the fourth and final single off "Camila", though is not featured on the track listing. It was released on October 9, 2018, through Epic Records, courtesy of Syco Music. 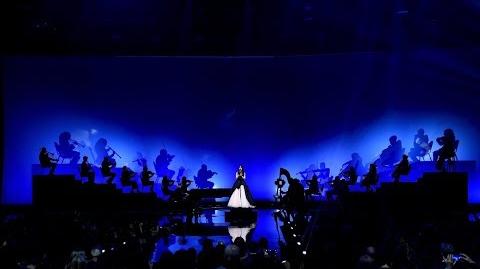 [Verse 1]
Dirty tissues, trust issues
Glasses on the sink, they didn't fix you
Lonely pillows in a strangers bed
Little voices in my head
Secret keeping, stop the bleeding
Lost a little weight because I wasn't eating
All the souls that I can't listen to, to tell the truth

[Verse 2]
Hesitation, awkward conversation
Running on low expectation
Every sign that I was ignoring
I'm paying for it

[Chorus 2]
Loving you was dumb, dark and cheap
Loving you still takes shots at me
Loving you was sunshine, but then it poured
And I lost so much more than my senses
'Cause loving you had consequences

Community content is available under CC-BY-SA unless otherwise noted.
Advertisement