I Know What You Did Last Summer, Senorita

Shawn Mendes is a Canadian singer-songwriter. Camila Cabello first met whilst on tour when they were both openings for Austin Mahone, but wasn't close until they met backstage at a Taylor Swift concert and wrote: "I Know What You Did Last Summer". Mendes confirmed they have been dating since July 4 2019.

They met backstage when on tour to open for Austin Mahone, but got to know each other more through a Taylor Swift concert, with whom they are both friends with. They made their first collaborations together, I Know What You Did Last Summer. They grew apart a little after the collaboration, but, according to an interview with Camila, Shawn soon reached out to her during 2018-2019 and pitched the idea of writing Señorita, which first Camila was reluctant because she didn't want to write a song too similar to Havana. But after a few months of shuffling back and forth, both of them recorded Señorita together. After dropping the steamy music video, numerous fans suspect that they are dating. After several photos of them hanging out together on July Fourth, and many more PDA photos, which some people think was just PR or a publicity stunt, they finally confirmed their relationship (seperately in different interviews and from different sources).. 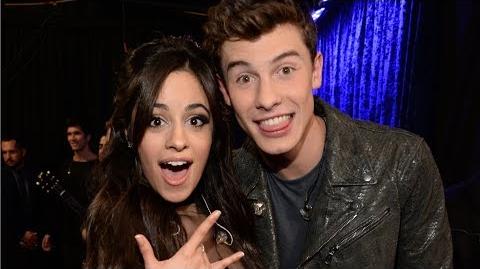 Shawmila Best Moments
Add a photo to this gallery

Retrieved from "https://camilacabello.fandom.com/wiki/Shawn_Mendes?oldid=18349"
Community content is available under CC-BY-SA unless otherwise noted.